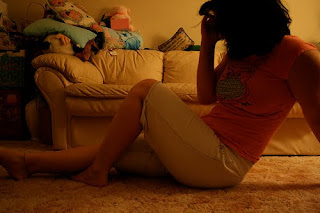 Flickr Photo by Giarose
Posted by Laura S. Scott at 9:30 AM

Email ThisBlogThis!Share to TwitterShare to FacebookShare to Pinterest
Labels: Brooke Shields, childless by choice, Laura S. Scott, mental health and parenthood, regret, they're different when they're your own

My mental health is probably one of my top 5 factors in choosing to be childless. Both my husband and I struggle with depression and I know for a fact that having a child would increase this struggle. It is not something that we need to put myself, my spouse or my child(ren) through. For us, having a child would be the ultimate selfish choice. As you discussed in your book, I believe that the world would be a much better place if those who choose to have children would think through their reasons as much as those of us who choose to remain childless do.

Mental health was definitely a factor when my husband and I decided not to have children. I grew up in a very turbulent home with a mother who is bipolar and refuses to take medication. My father is also schizophrenic - I suffer from mild depression. I knew that the stresses of parenthood are OK for most, but with that sort of genetic line running in my family - I wasn't going to risk it.

My primary reason for not wanting children is because I have already given up so much of my childhood because my parents were mentally ill, I feel like I deserve to hold onto every little piece of myself that I have left.

What a great post! I could relate to the woman who decided to terminate her pregnancy. I've never had that clock ticking, must procreate kind of feeling. I'm great with kids and like being around them, but I never had the desire to be a parent. A lot of it had to do with how I was raised.

But that's beside the point. I remember when my husband and I had a pregnancy scare one time. He was actually excited about it. I was bawling my head off all the time. I always suspected I would be the kind to suffer from post partum depression, but it was not a factor why I never had kids.

I loved that you shared this. Thanks!

My and my husband's mental health were a major factor in choosing to be childless. Not only for ourselves, but also for our potential children. After what I have experienced with depression, I do not want to pass that on to another person.

I have suffered from acute depression at times throughout my adult life, and experience a constant low-lying depression in between. That is a big factor for me in choosing to be childfree. I read years ago that a child with one parent with depression is twice as likely to have it themselves; with both parents suffering, the risk is quadrupled. Why would I inflict such hell on an innocent life, one which I'd actually chosen to create?

I know my mother suffered awfully when I was tiny and I suspect I would be the same. As for why post-natal stress is not discussed, could that be because the child-worshipping world we live in has promoted the mother to such an extent that no cloud can possibly sully her horizon? Conversely, I suspect, that this very attitude serves to foster the creeping mould of depression; she is no longer a woman, her own self, she is a mother and must have no other identity. Mothers are amazing, but they are not goddesses, they are human beings who need to be supported as much as their children.

After hours of googling I came across this page and I'm glad that I did. My story is similar to other peoples.

I've been ill for over a decade. I don't see it going away even with treatment. I've even been told that it may be a case of learning to with it mental illness. I am technically disabled because of it. I'm 25.

I want to get sterilized. Something my partner is against. It's a risk... I might change my mind... It's infringing on his rights as a person, and his free will, to have a child etc. But what about my right to health? Happiness and a good life? There are also all the 'you'll change your mind' arguments.

People don't realise how hurtful they're being. If I were well I'd LOVE to have children. But I'm not well. I really do feel I'd have had a better start in life if my mother, who was mentally ill, had decided not to have me. It's not about what I want. It's about what's right! It's not an easy choice for some people to be child-free; so telling them that they'll change their mind is an insult.

I really don't like my self-less choice is being talked-down by other people and their agendas. No matter who they are and how close they are to me. Respect works both ways.

I see that the positives on my health will out-weigh any upset I may feel about not having a child. A child-free life isn't an empty one.

The article was excellently written and just what I needed to read at this point in my life. The lady who aborted did so for her own health so I can understand why she did it. In all it's an eye-opening article about a taboo subject.

Yeah, I don't think that abortion was necessary the answer in this case. I don't want children for this same reason -- because of my depression and anxiety. But I have accepted that if I do become pregnant, that it was just meant to be. Or I would at least consider adoption. But it's not that child's fault...

All very valid perspectives! Am am touched by the really personal and heartfelt assessments of the ability to parent in the way we idealize and how some of us feel we might fall short.

Thanks for sharing this story. Even before I got married, I was leaning in the direction of not having children. For one, I didn't have a drive to be pregnant, and I had watched my sister and my cousin suffer greatly for having children (e.g., being trapped in bad relationships, disabling financial problems, scary pregnancy-related physical problems.) I've also suffered from constant low-level depression, and it takes everything I have just to make sure that I can go to work and keep on top of my own physical health by having the time to cook healthy meals and exercise.

I got married in my 30's and got pregnant early on accidentally. When the *severe* morning sickness kicked in, I became extremely depressed and full of unbearable anxiety. I truly believed that the pregnancy would kill me, plus I was completely freaked out at the physical changes I was beginning to experience. I wanted to be knocked out for nine months or checked into a mental hospital permanently.

I knew of the monolithic demands and sacrifices that I would have to go through over the next few years if I did happen to survive that long. Needless to say, my new relationship would have been obliterated as I had quickly become a bed-ridden, beyond-miserable person. Everything was beginning to go in the opposite direction of where I was trying to go in my life. I had worked so hard for my life to end up like this at my young age?

It was a mutual decision between me and my husband to terminate the pregnancy. He knew I couldn't take it and he fully supported me. Instantly, the morning sickness, depression, and anxiety lifted. I had my life back. We have never completely ruled out the idea of having one child, but now 38, I don't see how I'll be any more ready to be pregnant in the next couple years.

I wish this was something more people took into account before trying to have children.