A Birth Control Shot for Men 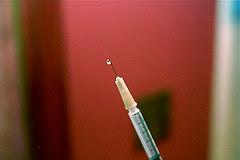 I’ve been waiting for the day when some drug company would introduce a new birth control method for men. We’re not there yet but this day is getting closer with a Chinese study designed to test the effectiveness of a new formula birth control shot for guys.

I thought this was pretty exciting stuff so I did a bit of research into this development, a summary of which was published in this month’s edition of Unscripted. Here’s an excerpt:

In a recent study, 1,045 Chinese men between 20 and 45 years of age were given testosterone injections for over two years. All these men had fathered a child within the last two years and their partners did not report any fertility problems. Yet these shots where able to prevent pregnancy 99% of the time, coming close to the success rate of female hormonal contraceptives.

It been know for years that testosterone shots suppress sperm production but in most previous studies men were subjected to weekly shots instead of the monthly shot given to the men in the Chinese study. Previously researchers and marketers had doubted that men would sign up for a weekly shot so the testosterone shot never really got traction as a viable method for male birth control. And, even though the men taking these shots reported very few side effects (acne and higher sex drive are two), there remains some concern about the long-term effects of testosterone on the prostrate gland and heart, and on the behavioral effects of testosterone.

The main benefit of the testosterone shot is, like the birth control pill for women, this method is reversible. So for those guys who want to take responsibility for their own reproductive lives but aren’t ready to be snipped, this could prove to be the answer.

The question is: Are there enough men out there ready and willing to take a monthly shot?

You tell me…
Flickr photo by stevendepolo (cc)
Posted by Laura S. Scott at 7:29 AM 2 comments:

Looking for the “No Children Guy” 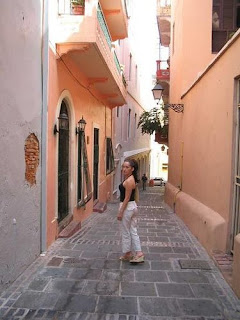 Niaris emailed me from Puerto Rico to share her story. She apologized for her poor english but in fact it was very good—she communicated very genuinely what many women, and men, go through when they tell their partners they don’t want kids, either they are not believed or their partner believes things will change over time. I’ve heard too many stories like hers to believe that you can change someone’s mind on a commitment as huge as parenthood. It rarely works. Here’s a bit of what she had to say:

When I was little girl I dreamt of having a family, but as I grew older that changed. When I looked around me I saw that the responsibility of the children falls to the mother. I think it is not fair to women—it should be an equal responsibility.

My first marriage ended because I did not want any children, although I made it clear from the beginning. He thought he could change my mind.

As I was getting back to dating, one of the characteristics I was looking for was a ‘no children guy.’ I found him. We got married two years ago.

Niaris still gets the “When are you having a baby?” question, and she weathers the reaction “the look on their face when you say ‘never.’ But that does not bother me. My choice is to live without children. I do not hate children; I just don't want the responsibility.”

Niaris brought up a point I think is important. Though many of the men and the women I interviewed weighed the responsibility of parenthood in the course of their decision making, the women did make the assumption that the bulk of the childcare tasks would fall to them, whether they were working full-time or not. I’ve often wondered if this imbalance of responsibility is one of the reasons why these women resist motherhood. What do you think?
Flickr photo by Ruth L (cc)
Posted by Laura S. Scott at 9:14 AM 1 comment:

Two Is Enough: A Couple’s Guide to Living Childless by Choice is Available to Pre-Order! 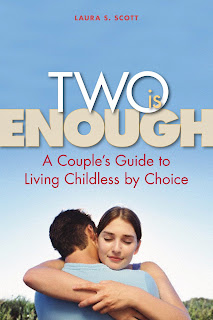 Finally, the book created out of the Childless by Choice Project is now available as a pre-order on Amazon.com.

If you pre-order on Amazon.com you can save 32 percent off the cover price and the book will automatically be shipped to you as soon as it hits the warehouse.

Just click on the link above or search “Two is Enough Childless by Choice” on amazon.com and pre-order the book and get it for only US$11.53.
This is the terrific discount for a new release, so take advantage!
Posted by Laura S. Scott at 8:27 AM No comments: