Do Our Favorite Toys Suggest an Inclination Towards Voluntary Childlessness? 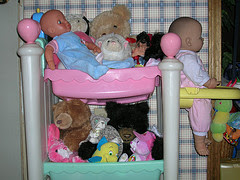 When I was doing my interviews for the Childless by Choice Project, I came across more than a few women who said they knew they were different at an early age because unlike their little girlfriends they were not pushing little prams or strollers around and playing mother.

This quote, from an article that appeared in HERnashville.com titled Maternal Instincts: An Honest Look Why Some of Us Don't Want to be Mothers—and Why That's Okay, serves as a typical example of what I heard during these interviews:

As a child, I didn’t want to have much to do with dolls. The only baby I chose to play with was a Cabbage Patch Kid named Jack Cornelius. Back then, my mother endured the lines and the mad rush to procure dolls for my sister and me, only to see me put Jack through the ringer once I brought him home. I rarely changed his diaper or rocked him to sleep. Instead, I would grip one of his soft arms with my teeth while climbing trees in the yard. Once Jack and I went on such excursions, one of two things would happen: I would send him diving headfirst to the grass below so I could reach a higher branch, or — as was more often the case — forget him up there altogether. He spent many a lonely night in those mesquite trees. It wasn’t that I didn’t love him; it’s just that he didn’t hold my interest for long.

I don't recall coming across any studies that showed that the choice of certain toys might suggest an inclination towards remaining childless, but I began to suspect that might be the case. I recall being much more enamored with my Gumby and Pokey bendable toys that any doll that was put in front of me. I absolutely adored my stuffed animals but I when I was given a doll as a Christmas gift I was severely disappointed, wondering what do I do with this thing?

It's funny but if someone would hand me an infant right now I probably would think the same thing.