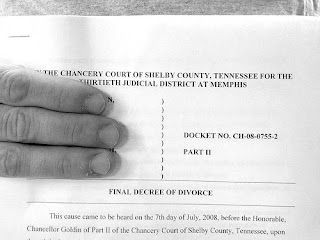 Are the childless more likely to divorce? This was the question posed to me by Vicki Larson, a journalist for Huffingtonpost.com, recently, and it gave me the opportunity to clarify.

She contacted me because she wanted to know why childless couples are more likely to end up divorced than couples with children, and this is how I responded in the subsequent article titled article titled “Are Childless Couples headed for Divorce?”

"Not all the childfree are intentionally childfree couples," Scott discovered…"A good chunk are postponers, those who delay parenthood."

Sometimes couples delay to the point that fertility problems arise. "Then the question of ''When should we have kids?' morphs into 'Should we have kids?" Scott says, forcing couples to explore other ways to have a baby, such as adoption, surrogates or in vitro fertilization (IVF). That, she says, can be extremely stressful and can lead to a fracture that a couple can't get past. In fact, many infertility specialists recommend marital counseling.

"If one partner desperately wants to try to have a child and one partner might not put as high a priority on it, that could be a deal breaker," she says. Often a couple hasn't discussed what point they stop trying -- how much money, how much time, how many procedures. Many women often feel like failures and feel less close to their partners; for many men, the fertility process can turn sex into anything other than pleasure. "I hear from men who say, 'This isn't fun anymore. I feel like I'm sperm on demand,'" Scott says.

What I wanted to express is that childless couples are childless or childfree thorough different pathways--either they have:
1) Intentionally delayed parenthood by taking actions to prevent conception; or
2) Tried to have a child but have not yet conceived, are infertile, or haven’t tried that hard (note the recent media focus on sexless marriages); or
3) Have had a child through live birth or adoption and have lost that child; or
4) Intentionally decided not to have biological children and remained childless through deliberate actions to prevent conception, or through termination of a pregnancy.

If you are childless because of 1), 2), or 3) and you and your partner are not on the same page decision-wise, or in a different stage or mourning or acceptance on the issue of children, there is a risk of a fracture. And if you are childfree because of 4) when both partners had agreed on remaining childless but one partner has since changed his or her mind that can be a serious issue too. In any case, it’s stressful, more so because you have a choice, unlike parents who already have kids and can’t take them back to the store for a refund.

So yes, the childless are more likely to divorce, some because they separate before the kids come along and are thus are not motivated to stay together because of the kids, some because they can’t agree on the number or timing of children, and some divorce for the same reasons couples who have kids get divorced: incompatibility, infidelity, emotional or physical abandonment, whatever.

Flickr photo by madmolecule
Posted by Laura S. Scott at 10:50 AM 5 comments: