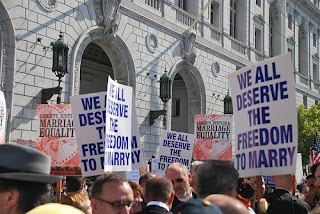 In my google search to catch up on the latest news on the Prop 8 case I came across Nan Hunter’s blog titled Hunter of Justice. Nan is a professor at Georgetown Law in DC and has also been following the progress of the Prop 8 same-sex marriage case in California. In her blog post, Hunter points out that the argument that children are integral to a marriage made by David Blankenhorn, founder of the Institute for American Values, at the Prop 8 trial, comes at the same time that U.S. trends show a weakening of the cultural assumption that marriage equals children.

Hunter offers an excerpt of a NY Times commentary written by Tara Parker-Pope who pointed out that while Blankenhorn makes the argument in federal court that: “Extending marital rights to couples who cannot conceive children would change marriage from 'a child-based public institution to an adult-centered private institution' and 'weaken the role of marriage generally in society’” US couples are spending less of their married years, or none at all in our case, raising children, according to a Rutgers’s report called “Life Without Children: The Social Retreat From Children and How It’s Changing America.”

And as revealed in a 2007 Pew Research Center survey, “only 41 percent of respondents said children were important to a happy marriage, down from 65 percent in 1990.”

So what is happening? Increasingly, more people are choosing to remain childless in early adulthood and/or choosing to have less children, resulting in many more years of “childfreedom.” No longer is the bulk of our adult experience consumed with raising children. So for Blankenship to suggest that we will weaken the institution of marriage if we allow same-sex couples who can’t conceive children to marry, he is essentially ignoring the millions of couples, gay and straight, who are proving him wrong and finding strength, stability, and happiness in their childless marriages or are choosing to use surrogates or donor sperm, or be adoptive parents.

In my opinion, Blankenhorn’s argument is a weak one, unsupported by evidence, and I hope and believe that Ted Olson and his team will prevail and prove that a ban on same-sex marriage is unconstitutional.

What do you think?

Carrie and Mr. Big are Childfree

I just saw the new Sex and the City 2 movie and was thrilled that characters Carrie and Mr. Big came out as childfree.

Political analyst and commentator Taylor Marsh noticed too and in her Huffington Post review of this film she gave kudos to SACT 2 writers for tackling issues of female empowerment around the world and challenging the myth of marriage and motherhood as a state of perpetual bliss:

As the plot deepens, Carrie has become a nag to Mr. Big about every little domestic thing. Newsflash, ladies. Domestic bliss compared to the emotional high wire can feel a bit mundane for the unprepared. In the end, finding out that as a relationship writer and expert on the topic, the one who knows more about marriage is her man. Aidan enters for the set up. All of this amidst Carrie and Mr. Big's challenge of choosing to be child-free in a world that still expects women to assume there is only one choice.

I can't lose the nanny moments come rarely, but few are funnier. Charlotte feels guilty about wanting to let out a primal mother scream because her girls are driving her insane. But Miranda comes to the rescue knowing how she feels, hoping to help Charlotte admit it over cocktails so she'll survive it all. Both mothers know how lucky they are to have help and take an emotional cocktail moment to salute the mothers who don't.

I agree with Marsh—this is a funny and very bold film which challenges conventional thinking and stereotypes. I went to the movie with two other childless/childfree women and we were thrilled that Carrie did not show regret over her childlessness like so many characters in previous Hollywood films and I was extremely pleased to hear Carrie and Mr. Big agree that "Two is Enough." I was tempted to imagine that the writers had read my book but perhaps this is just a coincidence.

What was clearly intentional was the implied acceptance of all choices that women might make and the resulting suspension of judgment, which is long overdue. Wear a burqa, or revel in your sexual appeal; have kids, or don’t have kids; adopt traditional models of family and marriage or make up your own rules. All options are embraced within the story of these four women, and that is something to celebrate!
Posted by Laura S. Scott at 7:08 AM 3 comments:

Pregnancy is No Longer Taboo for US Teens 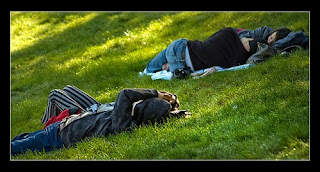 An alarming new report issued by U.S. National Center for Health Statistics shows that 40 percent of unmarried teens are having sex and some are hoping they will become parents as a result.

It appears the taboo of teen pregnancy is waning, much like the stigma of debt and online nudie pics. This caught the attention of the editors of Bloomberg Businessweek who published an article on this report and made a very valid point about this trend in terms of the economic impact to this next generation:

"One of the great success stories of the past two decades has been the extraordinary declines in teen pregnancy and childbearing," said Bill Albert, chief program officer at the National Campaign to Prevent Teen and Unplanned Pregnancy. "This progress has recently stalled out."

Perhaps more surprisingly, one in five teen girls and one in four teen boys who had had sex said they would be pleased if they or their partner got pregnant.

"This is really quite alarming," Albert said. "I don't think it takes a Ph.D. to understand that in this day and age and in this economy the route to success doesn't begin with a family at age 16."