How old is too old to have kids?

The recent news about the death of Maria del Carmen Bousada, the Spanish woman who gave birth to twins at 66 years old, made me very sad. She lived only a handful of years after she did what many thought was crazy—sold her house to pay for in vitro fertilization and delivered twins at an age when most women are happy to be empty nesters , grandparents, or childfree. She did this as a single woman, after having lied about her age to the doctors at a Los Angeles fertility clinic, where she was not asked for proof of age.

When I read the article about Bousada, written by Associated Press writer Daniel Woolls, I mourned for her and for her two small children who where only two years old at the time of her death and will likely have no memories of their mother, and it brought to mind a conversation I had with my husband when I was in my late twenties and happily childfree.

We talked about how some women hit thirty five and suddenly become desperate to have a child. I told him I was pretty sure that wouldn’t happen to me but he said, “If you decide you do want kids you have to tell me before I turn fifty because I don’t want to be an old dad.”

I took heed and made a mental note of that. He turned sixty last year and I’m forty seven and I have yet to report an incident of baby fever, and even if I did suddenly feel the grip of baby longing I would have to say that now it’s just too late.

I imagine, like Maria del Carmen Bousada did, that I will live into my nineties. But Bousada couldn’t anticipate the stomach cancer diagnosis a year after her twins were born and I can’t imagine chasing a kid around with gimpy knees and brittle bones at seventy. It would be crazy—it wouldn’t be fair to my husband and it wouldn’t be fair to the kid.
Posted by Laura S. Scott at 1:21 PM 1 comment:

Old but Not Alone 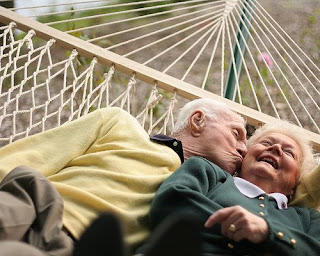 Our friends worry about us. What are you going to do when you get old? Who’s going to take care of you?

Most us have some canned answers to these questions, usually staring with “With the money we’ve saved by not having kids, we can…

…stay at the Marriott Residence assisted living place” or

Or stay at a Green House. I first heard about this new model of residential eldercare when my friend Linda gave me a copy of an article titled “Where to Live as We Age” written by Susan Fine for Parade magazine.

A Green House is the brainchild of geriatrician Dr. Bill Thomas who, with the help of a foundation and a non-profit organization, piloted this new type of residential living for the elderly. The Green House near shelters 12 “elders” and a multi-tasking staff who cook, clean, dispense medication, or organize activities such as dances and Nintendo Wii games.

The residents say the best thing about this model is the homey feel and intimacy and the fact that they can choose their meal times and live with their pets.

Sounds like a great place to be when it comes time…