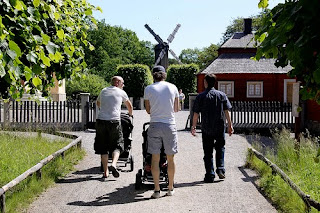 We’ve all heard about, or have witnessed in our own families, the devastating effects of post natal depression on women and their children. Now, a statistical review of previous studies conducted by researchers at Eastern Virginia Medical School has revealed that some men experience post natal depression too. A recent article in the Wall Street Journal noted that:

Some 10.4% of fathers experience depression during the postpartum period, the analysis showed. In the general population, 4.8% of men are believed depressed at any given point in time, according to government data.

For women, the rate of postpartum depression was estimated at nearly 24%, according to the new analysis, which was published Tuesday in JAMA, the Journal of the American Medical Association.

"When we look at the impact on families and children [of depression in new fathers], this is a public-health problem that goes beyond the individual," said James Paulson, a child clinical psychologist and pediatrics professor at Eastern Virginia and the first author on the paper.

The reasons for paternal postpartum depression are likely similar to those that contribute to the condition in mothers, including sleep deprivation, stress in the parents' relationship and isolation from friends, Dr. Paulson said.

The authors of this review are hoping that both men and women seek help for these symptoms as depression in one partner can trigger depression in the other. Maybe if we can recognize that parenthood is not all sweetness and light and acknowledge the challenges more parents will find the help they need.