Has Birth Control Made Us Richer and Happier? 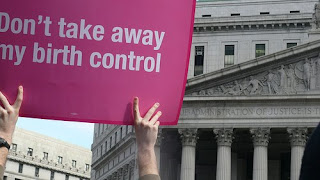 After reading Amanda Marcotte's recent article in Rolling Stone titled 5 Ways Birth Control has Changed America, I had a little gratitude moment that I was born 2 years before the birth control pill was available in America.

Had I been born even 25 years earlier things might have been very different for me. I likely would have been married at 18 or nineteen with 2 or 3 kids by my 25th birthday. I never would have gone to college, or started my own business, or travelled the world. I would likely be divorced, a single mom struggling financially. My kids would be struggling too, trying to put themselves through college, or burdened by a mountain of school debt as they try to make their way in the world.

I probably would be have found a way to be happy. I might have remarried, negotiating the step mother role in a blended family. I would be have taken pride in my children's accomplishments and my role in shaping their lives. I would like to think I would have been able find meaningful work outside the home, but the odds would have been stacked against me.

Fast forward to today and I see women in their twenties and thirties graduating college as single women, postponing marriage and child birth into their thirties, and pursuing careers that are both emotionally and financially rewarding. Most of them don't realize that it not for the pill and other reliable methods of birth control, their experience of young adulthood would be very different.

And America would be very different too. Here's how America has changed as a result of access contraception use, according to Marcotte:

"A 2012 University of Michigan study that examined women's gains over a period of decades determined that a whopping one-third of women's wage gains from the Sixties through the Nineties were attributable to greater access to contraception. Moreover, they found that the earlier women started taking the pill – at age 18 instead of 21, for instance – the more money the made over a lifetime.

Conversely, research on the effects of unintended childbirth shows that it is deeply detrimental to your pocketbook. Unintended child-bearing is linked to lower participation in the job market and higher dependency on government services. That so many Republicans would rather see more women on welfare than condone non-procreative sex tells you a lot about where their priorities lie.

There's been a mind-boggling decline in the teen birth rate. Most people think the teen pregnancy rate has been going up lately – there's this idea out there that kids today, with their hip-hop music and their "revealing" clothes, are somehow less "moral" than ever and therefore must be experiencing more unintended pregnancies. But in fact the teen pregnancy rate has been declining steadily since the late Fifties, and is now at an all-time low. But teens aren't having less sex than they did in the Elvis Presley era. The main reason for the decline is better contraception use, plain and simple.

This shift can be attributed to a lot of factors – more schools accepting women, more women seeking professional careers – but birth control has played a huge role. It should be obvious that avoiding unwanted pregnancies helps women complete college, but in case you're a skeptic, there's plenty of research showing that in states where more unmarried women have access to contraception, more of them finish college."

Are we richer and happier because of our access to birth control? Richer, for sure. Happier? Well that depends if you achieved what you wanted to achieve. But, really it depends on how you navigate your circumstances because, with kids or without kids, happiness is a choice.

Thank you for posting this blog up as it is helping me to complete a homework assignment for my health class that focuses on women's health! This blog post you wrote hit home for me in that I have been able to continue with college and make choices that would be completely different had I had a child by now. Thanks also to the states lowering the age requirement for procedures such as the bilateral tubal litigation cauterization I had the choice to be a childfree woman and not even need birth control anymore. However before I was even sexually active I was already on birth control due to health issues so besides being able to avoid the depression of an unintended pregnancy birth control stabilized my periods and helped me to avoid anemia. That could be another blog post maybe for the future!