The Truth About Parenting 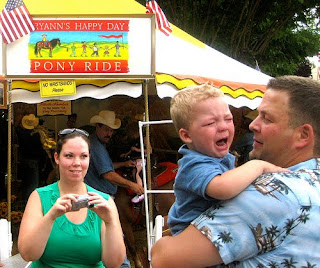 Chris, one of my Facebook friends posted a link on the Two is Enough wall to a New York Magazine article titled All Joy and No Fun. It’s an extremely well-written overview of recent studies showing how and why the fun has gone out of parenthood. Studies reveal that parenthood is getting harder with each successive generation. Even with their tight schedules parents actually spend more time with their kids then their parent’s spent with them, on average, but they get less out of it.

But outside of academia people just don’t want to believe these findings:

The idea that parents are less happy than nonparents has become so commonplace in academia that it was big news last year when the Journal of Happiness Studies published a Scottish paper declaring the opposite was true. “Contrary to much of the literature,” said the introduction, “our results are consistent with an effect of children on life satisfaction that is positive, large and increasing in the number of children.” Alas, the euphoria was short-lived. A few months later, the poor author discovered a coding error in his data, and the publication ran an erratum. “After correcting the problem,”it read,“the main results of the paper no longer hold. The effect of children on the life satisfaction of married individuals is small, often negative, and never statistically significant.”

Yet one can see why people were rooting for that paper. The results of almost all the others violate a parent’s deepest intuition. Daniel Gilbert, the Harvard psychologist and host of This Emotional Life on PBS, wrote fewer than three pages about compromised parental well-being in Stumbling on Happiness. But whenever he goes on the lecture circuit, skeptical questions about those pages come up more frequently than anything else. “I’ve never met anyone who didn’t argue with me about this,” he says. “Even people who believe the data say they feel sorry for those for whom it’s true.”

Why is this important to the childless by choice? Well, the next time someone says, “You’ll regret not having kid.” or, “Parenthood is such a joy, you’re missing out” you can send them a link to this article.

Flickr photo by The Enabler
Posted by Laura S. Scott at 11:02 AM

Take the Caring For Toddlers test and find out how good are you at caring for toddlers.

I suspect I will fail that one ;-)