Is Divorce Different for the Childless? 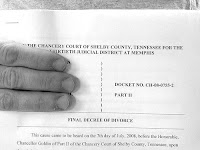 Despite the fact that studies, including the Childless by Choice Project study, show that childfree couples are motivated to remain without children because of marital satisfaction, the risk of divorce is still present. In fact, childfree couples are just as likely to divorce as are couples with children. Divorce is never easy—with kids or without them—but an article titled Modern Marriage Risks Amplified by Children recently published in Unscripted suggests that the divorce may be much less problematic if the couple has remained childless.

The article’s author, J. Bushnell pointed out that: “nonparent couples don’t have to stick out a bad or abusive relationship for fear of supporting a household or raising children alone. Unlike parents, childfree couples don’t have to worry about how a divorce will impact children; instead, they can split their assets 50/50, move on, and even move away, without concerns about taking a child away from its school district or nonresidential parent.”

Bushnell also pointed out that the risks of divorce are much higher for women than for men if they have children. “As 80% of children live with their mother following a divorce, perhaps women should seriously consider before starting a family whether they are equipped to parent alone one day if their marriage fails. Because single motherhood is clearly a very strong possibility.”

Imagine a drive-through wedding chapel in Las Vegas and the Elvis impersonator/ordained minister who is about to marry you asks “You have a fifty-fifty chance of ending up as single mother, are you still going to say ‘I do’ and have kids with this guy?”