I have been very fortunate in the fact that both my parents have always supported my choice to remain childfree. This is not always the case for childfree folks, as I documented in my book Two is Enough and the documentary film The Childless by Choice Project. Some parents do put a lot of pressure on their children to produce the grandchildren. Other parents just can't understand why.

I had a really happy childhood, with a Mom and Dad who were excellent role models for Parenthood. Yet I chose to remain childless by choice, not because I didn't know how to parent but because I didn't think parenthood was a good role for me.

I can't tell you how many times people have told me, "Oh, you would be such a great mom!" And maybe I would be but I am convinced that had I been a mother I would have experienced many  unhappy and frustrating days wondering why I had chosen this path when other paths seemed so much more appealing and natural for me.

This is why I was glad to see Barbara Walters, one of the hosts of  the current events show The View defend her daughter's decision to remain childless.  As a career television journalist, Barbara Walters knows more than most women how difficult it can be to navigate motherhood and career and clearly she is very proud of her daughter, saying that she's very caring and loving, particularly to old people like herself.

One of the other women on the panel already had a child but was planning for more and couldn't wait for the opportunity to breast-feed a baby. You could tell by the faces of the other women on the panel that breast-feeding an infant was definitely not something they were wishing for as they lay their head on their pillow at night. And this is why The View's panel of five women works so well and why we tune in. These five women are a diverse group from all walks of life and they have a variety of experiences and opinions about issues that concern us all.  Yet they can agree that parenthood is not for everybody and recognize that although they would happily choose parenthood for themselves they can understand why some women and men may not want what they want.

Lucky for us, and lucky for the networks who profit from these shows, we respectfully disagree!
Posted by Laura S. Scott at 2:09 PM No comments: 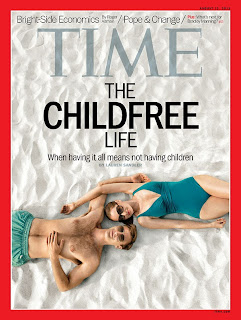 The Childfree have made it to the front Cover of Time! Four years after my book Two is Enough: A Couple's Guide to Living Childless by Choice was published and one year after the release of my documentary The Childless By Choice Project, I finally feel like the childless by choice have been recognized as the important emerging demographic that it is.

As I have said repeatedly, the rising numbers of childfree couples is a trend, not an aberration. The trend to postpone or ultimately forgo parenthood is a global trend that is likely to continue in the short term, as competing opportunities for women expand. It was nice to see that media outlet like TIME took notice and did such a great job of documenting this trend. And it just happened to coincide with the inaugural celebration of International Childfree Day (August 1) Kudos to Time and staff writer Lauren Sandler!!