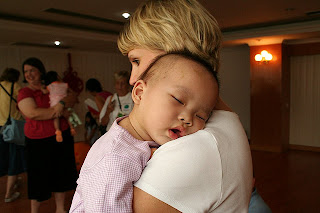 Author Stefanie Iris Weiss recently wrote a post titled My Uterus is Officially Closed for Business in HuffPost Living. Is she childfree? No, Stefanie is planning for children:

As a woman who often cries at the sight of infants and coos at her friends' little ones, having biological babies always seemed like an inevitable step. But once I fully wrapped my brain around the relationship of overpopulation to climate change, especially in the West, I made a big decision: I won't bring more kids into the world. I learned that even if I spent the rest of my life recycling, having even one child would increase my carbon legacy by 9,441 metric tons of carbon dioxide. I still crawl around on the floor with toddlers when given the chance, and go ga-ga for goo-goos, but my uterus is officially closed for business. I'll be adopting kids when the time is right.

When I was interviewing childfree couples and singles for the Childless by Choice Project, I saw a pattern. When I asked the question, “What happens if you change your mind and decide you do want children?” the most common response was “I am not going to change my mind on this.” The second most common response was “I/we will adopt.” This was true even for married women who were still in their fertile years and very likely could have had a biological child if they chose.

There seems to be a movement or shift towards adoption. It used to be the adoption was the last resort for infertile couples, now it appears to be both a viable and desired option for conscious decision makers who are either environmentalists or hold a strong belief that we need to take of the souls who are already on this earth. Or might there be some other motives to adopt? You tell me…

Flickr Photo by nik_donna
Posted by Laura S. Scott at 6:39 AM 3 comments: 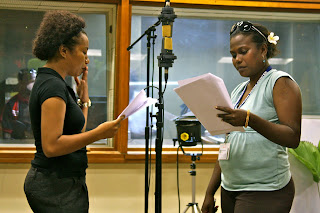 Population Media Center (PMC) is an international NGO, and a registered charity in the U.S., which is working to educate people about the benefits of small families; elevating the status of women; encouraging use of effective family planning methods; promoting the protection of children from exploitation; and motivating behavior change for avoidance of HIV/AIDS.

The stated mission of the PMC is to: “work with mass media and other organizations worldwide, to bring about stabilization of human population numbers at a level that can be sustained by the world’s natural resources, to lessen the harmful impact of expanding humanity on the earth’s environment and to help large numbers of disadvantaged people live better and move out of poverty.”

Using the Sabido methodology, developed by Miguel Sabido when he was the Vice president of Mexico’s Televisa network, PMC works with media partners around the world to create long-running serialized melodramas, written and produced in local languages, to create compelling characters that are, in time, adopted as positive role models for the audience to bring about changes in social norms on issues that are of concern in that particular country.

In Nigeria, these Sabido dramas have been shown to be highly influential in the reduction in the desired number of children and an increase in condom use. In Ethiopia, listeners of PMC produced radio serial dramas sought HIV tests at 2.5 times the rate of non-listeners. PMC customizes the programs in consultation with their media, government, and NGO partners in Africa, Asia, the Caribbean, and North America to meet the particular goals of that region or country.

According to the PMC: “The programs incorporate many issues to make them reflective of life in the society rather than single-issue programs. Among the issues most frequently addressed are HIV/AIDS, age of marriage and childbearing, family size and health, contraceptive safety, self-efficacy with regard to childbearing decisions, employment for women outside the home, education of girls, ending abusive child labor, child survival, and conservation of natural resources.”

I normally don’t use this blog as a platform to highlight charities but the work of The Population Media Center is so impactful and amazing to me that I felt the urge to share it with all of you. Feel free to give shout outs to your favorite charities and NGOs here in the comments too!


Photo of actresses in Papua New Guinea recording a radio serial courtesy of PMG
Posted by Laura S. Scott at 7:17 AM No comments: