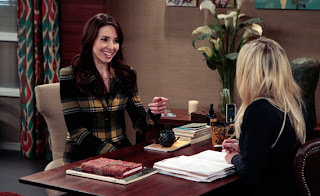 Jessica Grose, writing for Slate wrote an excellent article titled Child-free on TV about the childfree characters on some of our favorite situation comedy shows. Grose points out that these characters tend to exhibit masculine traits and send the message that women who don’t want kids are somewhat flawed or dysfunctional:

This message was driven home this week by the way two prime-time shows—How I Met Your Mother and Whitney—dealt with female characters who say they don’t want children. While this may be an uncommon choice on an American sitcom, it’s of course not an uncommon choice in America; the share of American women who don’t have kids has doubled since 1976. But neither of these characters—Robin (Cobie Smulders) on HIMYM and the titular Whitney (Whitney Cummings, also the show’s creator)—was allowed to fully embrace her desire not to have kids. Though Robin’s conflicted feelings about baby-rearing were treated in a much more enlightened way, it’s telling that on both shows, the characters who don’t want babies are women who like shooting guns and talking dirty, but who are grossed out by feelings. These shows are implicitly saying: Of course only a woman who’s not really feminine wouldn’t want to be a mom.

This article merits a full read as it highlights so much of what is wrong about the portrayal of childfree characters in our most popular media. If these characters bore an actual resemblance to the childfree women and men I know I might not be concerned but the reality gap between the sitcom childfree and the childfree that I see and know is so wide and troubling that it can’t be ignored or condoned.

I've been wondering why more people aren't talking about this... this Slate article puts a more positive spin on HIMYM's episode than the way I took it... I was PISSED OFF. (*Spoiler Alert*) If Robin was SO HAPPY/relieved to discover she wasn't pregnant, it's not consistent with her character for her to be drunk-making upset when she finds out she can't have kids. She should have been relieved, not depressed. I can understand a small struggle at first, but not that kind of reaction. It simply wasn't consistent with her character. And I'm also VERY glad now that I don't watch Whitney... and I never will.

Thank you for posting that link, Laura. I came to childless/free living via infertility & loss, so my perspective is slightly different than yours. I did think that, from that perspective -- the disappointment & shock of hearing that the choice you once took for granted is no longer a choice for you -- it was a powerful episode, very well played by Robin/Cobie Smulders.

But I did have mixed feelings about the episode -- I too thought it was quite out of character for Robin, & I knew they wouldn't follow through with the pregnancy, whether she had miscarriage or whatever. I couldn't quite put my finger on what was bothering me, & your post & others have helped clarify it further for me. It's disheartening that the writers & producers couldn't just let Robin be plain old childfree -- that she had to acknowledge some regret about not having children to soften her edges just a little & make her more acceptable somehow to the pronatalist majority in the audience. People like me (who thought they were going to be Lilys, but life had other plans for us) need people like you & Robin as role models for the positive side & possibilities of childfree living. : )

Loribeth,
I hear you on the pain of not having the choice and I am glad the show addressed this because it's so real.
It's totally normal to feel sad when you don't have the full palate of choices, even if the option that is off the table is one you wouldn't have likely have chosen. And it's normal to feel even sadder if it is the option you would have chosen.
I think many women, like me, who have made the choice to remain childless when all options are available, are troubled when women who make this choice are consistently portrayed as comically or tragically flawed or destined for regret, when the reality is quite different.